Every Vermont dairy farm has a unique story. For some farms, that story began two hundred years ago and continues to evolve into new chapters with each new generation of family farmers. For others, the story began more recently with a passion for the land, a love of animals, and a dream of what a dairy could be. Through all these farm stories, you’ll find common threads of hope, hard work and independence that every Vermonter can appreciate. Meet some of Vermont’s dairy farmers: 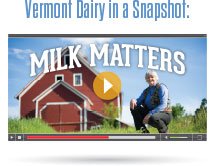